With the tile floor pattern set and the problem of the gaps mostly solved, it was time to translate thought into action. Or, in my case, from the cardboard to the dollhouse!

I knew I would face a few challenges (uneven floorboards, anyone?), but, fortunately, it looks like the challenges I did face have a quick fix!

As a reminder, here’s what the second floor of the dollhouse currently looks like:

For the record, the wall isn’t firmly in place, and I don’t think I’m going to orient it that way, but this is just to see what fits and what doesn’t.

As you can also see, my board cutting skills are excellent! My board measuring skills… not so much.  Here’s a close-up:

What’s funny is that as I look at these pictures, it looks like it’s the wall that’s uneven and off-kilter, not the boards. But, trust me, it’s the boards!

This is the first challenge: what to do about these messed-up boards? However, I’ve decided to worry about them last. I feel like it makes more sense to tackle the tile floor first then deal with the uneven wood floorboards. Then the wall should fall into place.

Starting at the End

My biggest concern is that these are mosaic tiles, not tile tiles if that’s a thing. The bottoms of the mosaic tiles have edges and grooves. How is that going to look at the front of my dollhouse? There’s only one way to find out!

First, I line up the border tile at the edge of the floor, ensuring they are flush with the end. I used the wall to make sure everything was even:

Yes, those are my feet.

From the top down, it looks good. From the side, though, well, let’s just say it turned out about how I expected:

Gappy, to say the least. That said, this might not be such a big deal. After all, it will only be this one row that shows these gaps. With the rest of the pattern, the tiles won’t orient this way, meaning, even if you do look at the floor from this angle, it won’t be a straight shot up the gap, like you’re looking through a tunnel. So, maybe this one edge being gappy isn’t that big of a deal.

That said, I’m not satisfied with how this looks. It’s uneven and unfinished. So, I redo the border row with the tiles oriented the other way, so you can’t see the middle groove from the side:

That’s a little better, even if I missed one. In theory, when this is all in place, those gaps shouldn’t show. Or, they won’t be as obvious with the glue filling in the empty space.

The next thing I wanted to check was if this would all fit. When I traced out the template, I kind of cheated. I used a ruler to get a straight line. Those are important, after all. But I kind of ignored the fact that the uneven boards mean my template is probably a bit off.

This time, I can’t cheat. I’ve got to get the wall straight to ensure I’ve got the correct bathroom dimension and create the exact right pattern. So, I put the wall back in, aligning it with the longest boards:

From this angle, that looks pretty good, actually. It seems like I’ve got the wall exactly one tile width over, which is good. I hadn’t totally decided what I was going to use as a transition between the rooms (wood or tile), but it looks like I could use tile in a pinch since the measurements seem spot on.

Of course, looks can be deceiving. To check my work. I started building the border up the side. And that’s when I found this:

It’s hard to tell, but the wall is forcing the line over just a touch, but enough that it’s pushing the tiles out of alignment. That’s not a huge deal, though. I had a feeling that would happen, and it’s good to see that I’m right. Of course, that means making adjustments, but that will come later.

Next up, making sure my depth measurements are correct. Along the opposite side (the outside wall), I build up the other side of the border. As I get to the end, I have a feeling my tiles are not going to fit evenly, and it turns out I’m right.

When I realized what was probably going to happen, I stopped placing the tiles from front to back and started coming from the back edge to meet up with the already in place border. I did this because I knew from my experience with the wood floor that there’s a funky space where the roof meets the floor, and I’d never be able to see what’s happening.

That’s clearly not going to fit one tile. Here’s proof:

In this view, the lead tile is flush with the front edge of the floor:

It’s hard to tell from that angle, but the top of the tile is aligned with the edge.

When I slide the tiles together to fill the gap, I’m still left with a gap at the back of the floor:

That’s not one tile length (or width? I’m never sure with squares) of gap. See:

Drat. I thought I had this measured perfectly.

No matter. This is really just a test to make sure I like the pattern. I can worry about true fit when I finish creating the pattern. Moving along, I build out the back part of the border, so I have a better idea of how the final pattern will look, even if it doesn’t fit right (yet!):

With the back of the border in place, I lay the other tiles down in the new and improved pattern. Because I’m hoping to nip more white than blue tiles, I swap the pattern and start with a row of blue tiles.

Before I show you what that looks like, I should explain that laying that first row was a pain in the behind! Everything kept sliding and moving every time I added a tile. It got better the more I worked, though. My guess is because as I added more tiles, there was more “stuff” to hold things in place. And, I suspect that when I glue the tiles down, this will be even easier.

My plan is to do a tile row then let it dry, much like with the wood floors. I suspect that if the tiles are tacked in place, every time I add a new one, they are less likely to move, slide, and irritate me. All good things. That means, of course, this will take 10 times longer than I’m planning, but it’s a labor of love. That’s what happens!

First up, two tiles sitting in place. I had to fuss with them a bit to get the alignment right:

Then the whole row:

As you can see, the tiles are a little “off” in terms of alignment. But, I figure that as I put in the next row, and the next row, and so on, as I push and slide other tiles into place, the previous two will fall in line. 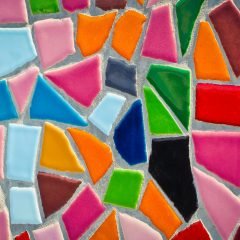 We use cookies on our website to give you the most relevant experience by remembering your preferences and repeat visits. You accept the use of cookies by closing or dismissing this notice, by clicking "accept," or by continuing to browse.
Do not sell my personal information.
Cookie settingsACCEPT
Manage consent

This website uses cookies to improve your experience while you navigate through the website. Out of these, the cookies that are categorized as necessary are stored on your browser as they are essential for the working of basic functionalities of the website. We also use third-party cookies that help us analyze and understand how you use this website. These cookies will be stored in your browser only with your consent. You also have the option to opt-out of these cookies. But opting out of some of these cookies may affect your browsing experience.
Necessary Always Enabled
Necessary cookies are absolutely essential for the website to function properly. This category only includes cookies that ensures basic functionalities and security features of the website. These cookies do not store any personal information.
Non-necessary
Any cookies that may not be particularly necessary for the website to function and is used specifically to collect user personal data via analytics, ads, other embedded contents are termed as non-necessary cookies. It is mandatory to procure user consent prior to running these cookies on your website.
SAVE & ACCEPT
Social media & sharing icons powered by UltimatelySocial